Did you ever wonder if there was a different way to view really thriving and truly being alive? Author John Robertson did as he kept seeing people reacting to issues after the fact. When a “roar” happens in life there are normal fight, flight, freeze, and appease reactions but what would happen if we ran toward the roar instead of merely reacting?

Instead of treating roars, storms, or crises as something to react to or try to avoid, we can plan for them so that we respond instead of reacting. Sometimes the theme of resilience, well-being, and thriving becomes so clinical, theoretical, or pie-in-the-sky that it is not practical or helpful. Like so many educational approaches, oftentimes the approach tends to be a transfer of information rather than transformation.

Run Toward the Roar reframes thriving and resilience to find and focus on what you love so that you will be faithful and loyal, regardless of the roars that cross your path.

This book is a way to think about thriving by using a different lens. One thing that author John Robertson has learned from the many first responders he has worked with is a quality they call ‘muscle memory’. The premise is simply where one trains so frequently that when they are faced with something challenging, they do not react, they respond. Their muscle memory takes over to the extent that they can react opposite to most normal (untrained) humans. They are able to run toward the roar instead of the normal reaction of running away from it.

Robertson incorporates this same practise for thriving and finishing well in his work as a workforce wellness and cultural alignment specialist.

Unfortunately, it is often through change, crisis, and “roars” that people learn they have drifted off course. We, as individuals, workplaces or communities , have allowed the important things to diminish while getting caught up in the urgent. We all have values, but sometimes we do not determine these beforehand. The result of “roars” is that it works like a tea bag in hot water; we are the tea bag, and what leaks out is guilt, regret, or the old ‘woulda-coulda-shoulda-if onlys’.

The Run Toward the Roar approach is about reframing and defining those values, finding a focus to be passionate about and also willing to be loyal and faithful to.

You are invited to Run Toward the Roar. 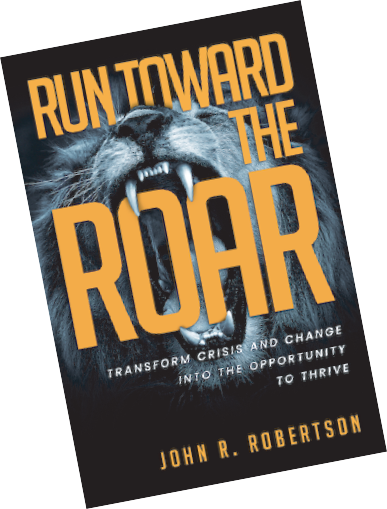